Mara vd Bissschop (s. Elvis Ter Putte) was also good for a placing in Lier. Under Christophe Vanderhasselt, the mare jumped to a third place in the 1.40m. Fouego de la Closière (s. Nabab de Rêve) took care of the top results in Prague. He came second in the GP2*, second in the 1.45m Table C and third in a two-phase 1.45m class, each time with Jane Richard Phillips.

At the youth competition (U25) in Opglabbeek, Aurelia Guisson made herself noticed riding No Limit Vh Legita Hof Z (s. Nabab de Rêve). They finished sixth in the GP (1.45m) and third in another 1.45m class. 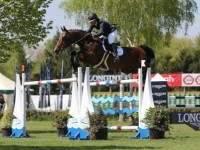 No less than four stallions in the top 100 WBFSH ranking

Offspring by Nabab and Vigo continues to dominate