Nabab de Rêve-sons stand out on all levels

Nabab de Rêve-sons stand out on all levels

As was the case last year, the now ten-year-old Navarone Z achieved an excellent result in the Dutch Championships for Seniors in Mierlo together with his rider Gerben Morsink. Last year, the duo took silver, this time they landed in fifth place.

In German Hagen, the progeny of Nabab de Rêve was also very well placed. Gravity of Greenhill was piloted to the second place in the GP (1.60m) by French rider Julien Anquetin and in a 1.45m-class, there was a fourth placing for Werner Muff on Jolie van het Molenhof.

Uraeus Blanc HDC won a 1.45m-class in St. Tropez, as he did last week, ridden by Patrice Delaveau and Firefly W (Matthew Sampson) took the victory in a 1.40m-class in Opglabbeek. In the latter class, Christof Deraedt and Beijing Z (s. Bamako de Muze) became third.

The genes of Nabab de Rêve were also indirectly represented through his son Vigo d’Arsouilles. Van Halen Z for example, finished fourth in a class for seven-year-olds in Hagen. In St. Tropez on the other hand, there was a third place for Irish rider Billy Twomey on Gentleman.

Furthermore, there were a lot of fine performances in the classes for young horses here and there. Mackenzie Ray jumped a couple of clear rounds in Austrian Ebreichsdorf with the six-year-old Oakingham Sterling (s. Vigo d’Arsouilles).

In Opglabbeek, there was a victory for Manda Rautenberg on five-year-old Honolulu (s. Elvis Ter Putte) for the second week in a row. Oechie K (s. I’m Special de Muze, Brecht Goossens) also did great in the same age category.

In the classes for six-year-olds, there were placings three days in a row for Jan Maly on Excalibur Sr Z (s. Elvis Ter Putte) and in the classes for seven-year-olds, it was Gotham City PL (s. Filou de Muze, Omer Karaevli) that could add two more victories to her already impressive curriculum.

To top off this week’s overview, we should mention the victory of the only eight-year-old Lou Lou VLS (s. Elvis Ter Putte) in Hagen. Ridden by Yuri Mansur, the mare won a 1.40m-class. 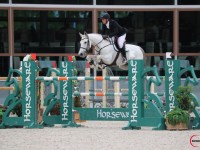